After seven-month postponed AFCON qualifiers across the continent, Nigeria’s Super Eagles returned home to face the Leone Stars of Sierra Leone after their last outing in Uyo against Benin Republic on November 14. TUNDE LIADI writes

Previous results between Nigeria and Sierra Leone have been overwhelmingly in favour of the Eagles with nine wins, three draws, and two losses in international friendly games, World Cup qualifiers, and AFCON qualifiers as well.

Both nations met for the first time in 1961 in a friendly match in Freetown and Sierra Leone were overwhelmed 4-2 and the Eagles remained unbeaten against them for 26 years before the Leone Stars secured their maiden win (2-0) on 18th July 1987 in an AFCON qualifier.

The defeat turned out to be inconsequential because the Green Eagles had beaten the same team 3-0 in the first leg played two weeks earlier in Lagos and thus advanced to the 1988 AFCON in Morocco 3-2 on aggregate.

They snatched another rare victory on 21st April 2001 when the Eagles stumbled to a 1-0 defeat at the Siaka Stevens Stadium, Freetown in a 2002 World Cup qualifier. Both last met in a competitive fixture in 2008 in a 2010 World Cup qualifier which the Eagles triumphed 4-1. But there was still a friendly game in 2011 which marked the beginning of the Samson Siasia reign as Eagles coach then.

Knowing that football is no mathematics and that supposedly minnows are striving harder to catch up to ensure they improve in the CAF/ FIFA monthly rankings through getting surprise results against ‘big’ teams like Nigeria. 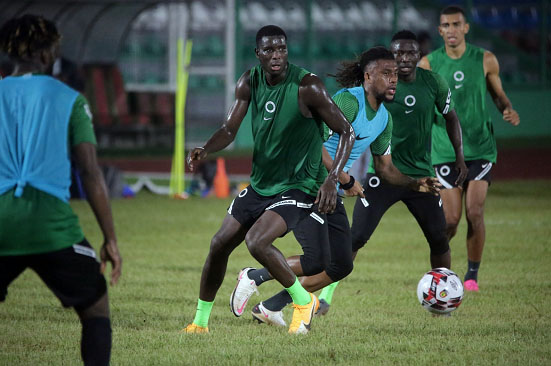 Before now, Sierra Leone depended mostly on their home-based players but things have changed in recent years as they now have players playing professionally in Europe and other parts of the world. In the last friendly game in 2011, the Leone Stars pushed the Eagles to the limit before surrendering 2-1 in Lagos. Anyone that thinks Friday tie would be a stroll in the park must rethink.

Sierra Leone know they have been boxed to a corner and that only a positive outcome in both games will see them bounce back in the race for 2021 AFCON finals but a negative outcome could put them on the brink of elimination. They are on the bottom of Group L with one point.

Nigerian players have been talking tough ahead of the tie with Captain Ahmed Musa admitting they do not have much information on their opponent.

“It is true we don’t know much about the Sierra Leone national team, but we have resolved to play our best game to beat them at our home and away,” Musa told journalists.

“Two victories over them will give us the ticket to AFCON, so we won’t joke with the games.”

Musa also spoke on the role of fans that won’t be at the stands because of the Covid-19 guidelines from CAF: “Playing without our ever-supportive fans at the newly refurbished Samuel Ogbemudia Stadium will not affect our games both in Benin City and Freetown. It’s quite a pity that Edo fans will miss the opportunity of seeing us play live because of the pandemic but we shall try to win for them.”

Oghenekaro Etebo who jetted in from Turkey charged his teammates to be mentally and physically ready to surmount them.

“Nigeria and Sierra Leone competitive wise we all know Nigeria is ahead of them, but now it is football and anything can happen,” he told NationSport in an interview.

“But the most important thing is that we must be mentally and physically prepared. We should do what we know how to do best and hope for a better game.

“The coach knows the best to line up for the game so we are hoping to see how it goes. We are going to make sure we put more effort and try our best to come out victorious in the game.”

Super Eagles assistant coach Joseph Yobo cautioned the players to settle for nothing less than three points when they face off against Sierra Leone on Friday.

He acknowledged that the Leone Stars has always been a difficult nut to crack in Freetown.

“Big game, we expect a big performance. We need a result at home which will help us further in the qualifiers.

“A win at home will mathematically put us in the driving seat, but it is important to play well to take all three points,” Yobo said to Super Eagles TV.

“Away from home as always Sierra Leone, especially, is a difficult place to go and win.”

Yobo recollected with pride that he scored the game-winning goal the last time the Super Eagles faced Sierra Leone in an away match a World Cup qualifier on June 7, 2008. 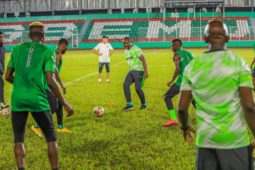 On his part Belgium League joint leading scorer, Paul Onuachu expressed his resolve to re-enact his scoring prowess with the Super Eagles in the AFCON qualifiers

Onuachu has scored an impressive nine goals in the current campaign and currently joint-top scorer along with Beerschot’s Raphael Holzhauser in the Belgian Jupiler League.

“Football is an up and down thing and you try to find your balance again,” said Onuachu.

He continued: “I will just keep working hard and keep fighting for me to be part of the team and whenever I am part of the team, I will try to do my best to score for the country.

“But if the goal is not coming yet we cannot do anything about it; I will just keep working hard for the country and also try to score.”

“In my club, I play with people who know and understand my strength,” he explained. “It is a different scenario in the national team where we just try to fix everything together to make the best out of everybody in the team.”

In all, Super Eagles handler, Gernot Rohr should stick to the same set of players that featured in the last month’s two International friendlies with Tunisia and Algeria but with a little tweaking to accommodate Joe Aribo and a few others that will add urgency, energy and vibrancy that were lacking in the games they played in the last international break in Austria.

He was initially billed to have his debut in the last international break in their games with Mauritania and Niger Republic but club commitments prevented him. The Eagles defence will have a torrid time curtailing the striker.

Kei Kamara (Minnesota United, USA): Kei is still famous for his brilliant goal against Liberia during the return leg of the preliminary round of the 2022 World Cup qualifiers. He retired from international football not too long later but Sierra Leone coach; John Keister had convinced him for a change of heart. The 36-year-old attacker combines experience with agility and the Eagles must be on the lookout for him.

Umaru Bangura (FC Zurich, Switzerland): Bangura was not in the initial list of foreign-based players invited for the Eagles cracker because he tested positive to Covid-19 in Niger during their friendly tie and had to self-isolate for 10 days. He has overcome it and has been recalled to the team. Sierra Leone needed the energy of their skipper to trouble the Eagles today.

Mustapha Bundu (Anderlecht): The young attacker is gradually making waves in the Belgian League with the former league champions. Vincent Kompany, his coach at Anderlecht, has featured him six times already in the league this term in only his first season with the club. Bundu is strong, energetic and highly mobile.

Rodney Strasser (TPS Finland): It is difficult to tell why Rodney’s game level dropped after playing in Finland since his electrifying start for the AC Milan youth team in the 2008-09 season. He must be relevant to coach John Keister’s team hence his recall to the team.