After many failed attempts, I asked my daughter to go for BBNaija, says Angel’s mom

According to the 37-year-old mother, she and her friend had tried severally in the past to be on the show but always had to cancel it due to unforeseen circumstances.

Angel’s mother stated owing to her unsuccessful attempt to get on the show, she supported her daughter and ensured she got on the show.

Titi warned those who intend coming to her page to insult her, stating she would not hesitate to insult their mothers thereafter, block them.

She wrote: “A lot of you don’t know that before I asked my daughter to go for BBN me and my girl @chefyeide has been trying to go for it but something always comes up that we have to cancel it. 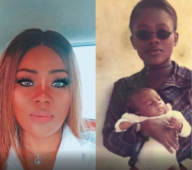 “So if you come to my page to insult me, I swear on the woman that gave birth to me, I will insult you before I block you.”

Meanwhile, Angel had spoken about her young parents on the show.

The most talked about female housemate in the process revealed her mother gave birth to her at 16, adding her father manages her social media page.


Warning: count(): Parameter must be an array or an object that implements Countable in /home/xcluiyxq/public_html/templates/shaper_news365/html/com_k2/templates/default/item.php on line 256