Protesters campaigning against the Police Special Anti-Robbery Squad (SARS) excesses on Monday grounded Lagos, Abuja and some major cities across the country.

The protest turned violent in Lagos where two people, including a police Inspector were killed.

Economic activities in the nation’s commercial capital were halted as protesters in clusters, moved around the state and stalled traffic along the major roads for many hours.

The entry point to Lagos from Ibadan was held up by the protesters in the afternoon. 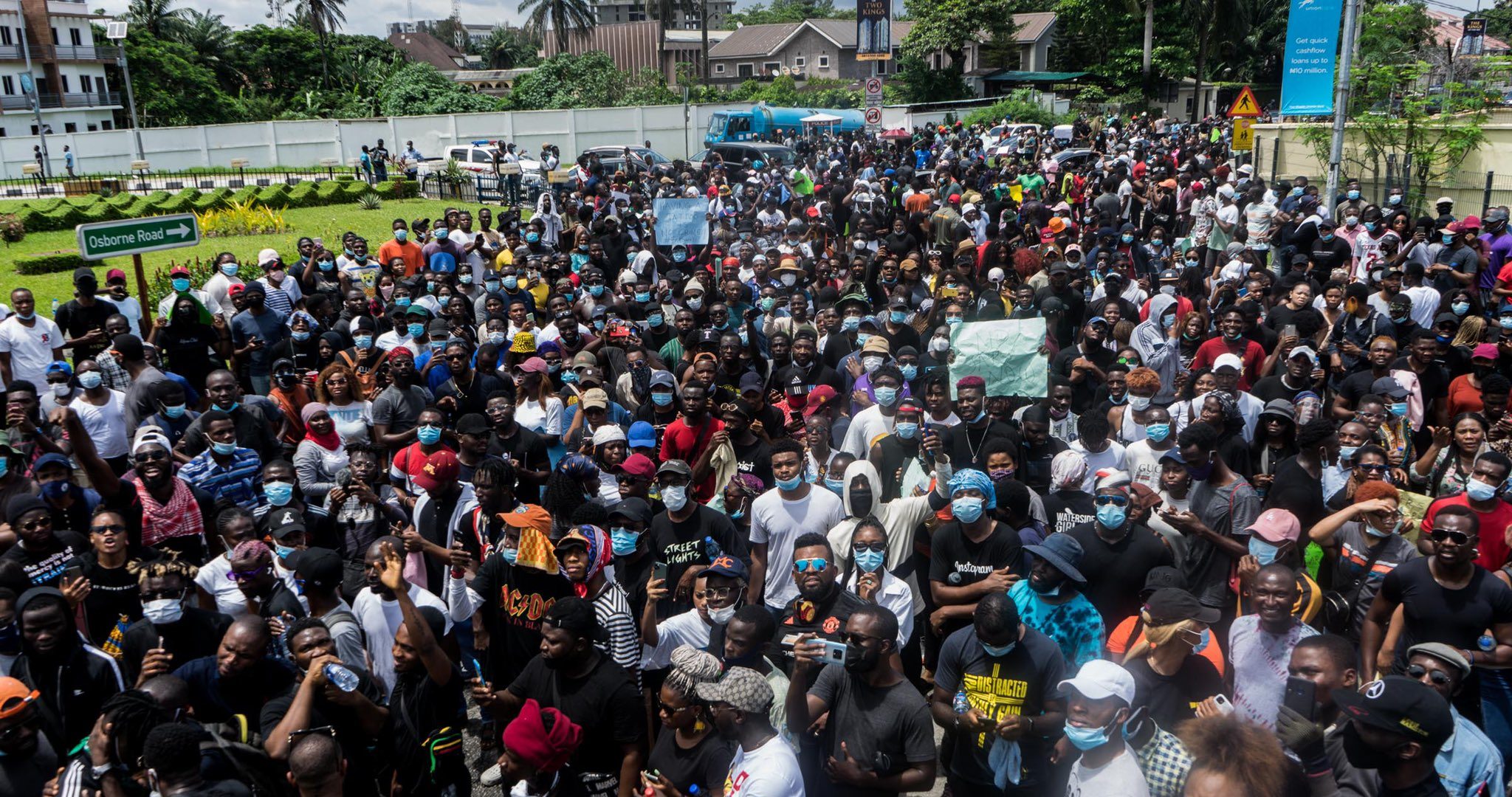 Lekki highway was blocked from morning, preventing people from going to work. The Murtala Muhammed Airport Road and others also shut down.

In Surulere, where the killings took place, businesses quickly shut down with people scampering to safety.

Many Lagosians were stranded in traffic for hours. Many others could not reach their destination.

There were protests, in Abia, Delta and Ebonyi states and many other places.

The protest, which started almost two week ago, culminated in the announcement of the disbanment of the SARS by Inspector-General of Police Mohammed Adamu on Sunday.

IGP Adamu said a new policing arrangement to replace the now-defunct police unit would be announced in due course.

He redeployed with immediate effect, all officers and men of the SARS unit.

On Monday, President Muhammadu Buhari said the scrapping of the SARS will be followed by a massive reform of the police.

But these pronouncements could not stop the protesters who staged rallies in Ikeja, Lekki and other areas in Lagos.

He alleged that the protesters, at about 1 pm, laid siege on the Anti-Kidnapping Unit Office of the command, broke into the cell and freed two of the kidnap suspects, before they were repelled.

“In addition, the protesters fired and killed one Ikechukwu Ilohamauzo, 55, a driver of one Toyota Sienna Bus, marked LSD 296 FX, who got stuck in the traffic caused by the blockage of the road by the violent protesters, in Surulere.

“It is pertinent to state that the attacked police inspectors and Mr Ilohamauzu were hit and injured by pellets reasonably fired from pump actions/locally-made guns.

“The bodies of the deceased have been deposited in a mortuary for autopsy,” he said.

Adejobi said four suspects were arrested in connection with the incident.

There were reports that more persons were arrested and detained at Area C police station, with many urging the governor to ensure they are freed.

But in his account of what transpired, Commissioner for Information and Strategy Gbenga Omotoso, said no protester died in Lagos on Monday.

He said in a statement: “The attention of the Lagos State Government has been drawn to reports that an #ENDSARS protester has been killed in Surulere. This is not true.

“One of them, Inspector Erinfolami Ayodeji, unfortunately, died. The others are Inspectors Ekein Joshua and Peter Agabi.

“The hoodlums, while escaping, fired into the air. A bystander was hit. He also died – sadly.

“Governor Sanwo-Olu commiserates with the families who lost their loved ones and prays that God will strengthen them.

“He urges all those concerned to ensure that these protests do not degenerate further and create room for hoodlums who do not mean well for our society.

“The government is working with the Police to ensure the restoration of the peace that Lagos has always been proud of.”

According to some of the protesters, the government is not sincere with the ban on SARS.

Governor Babajide Sanwo-Olu assured the protesters that there will be no further police brutality in the state. 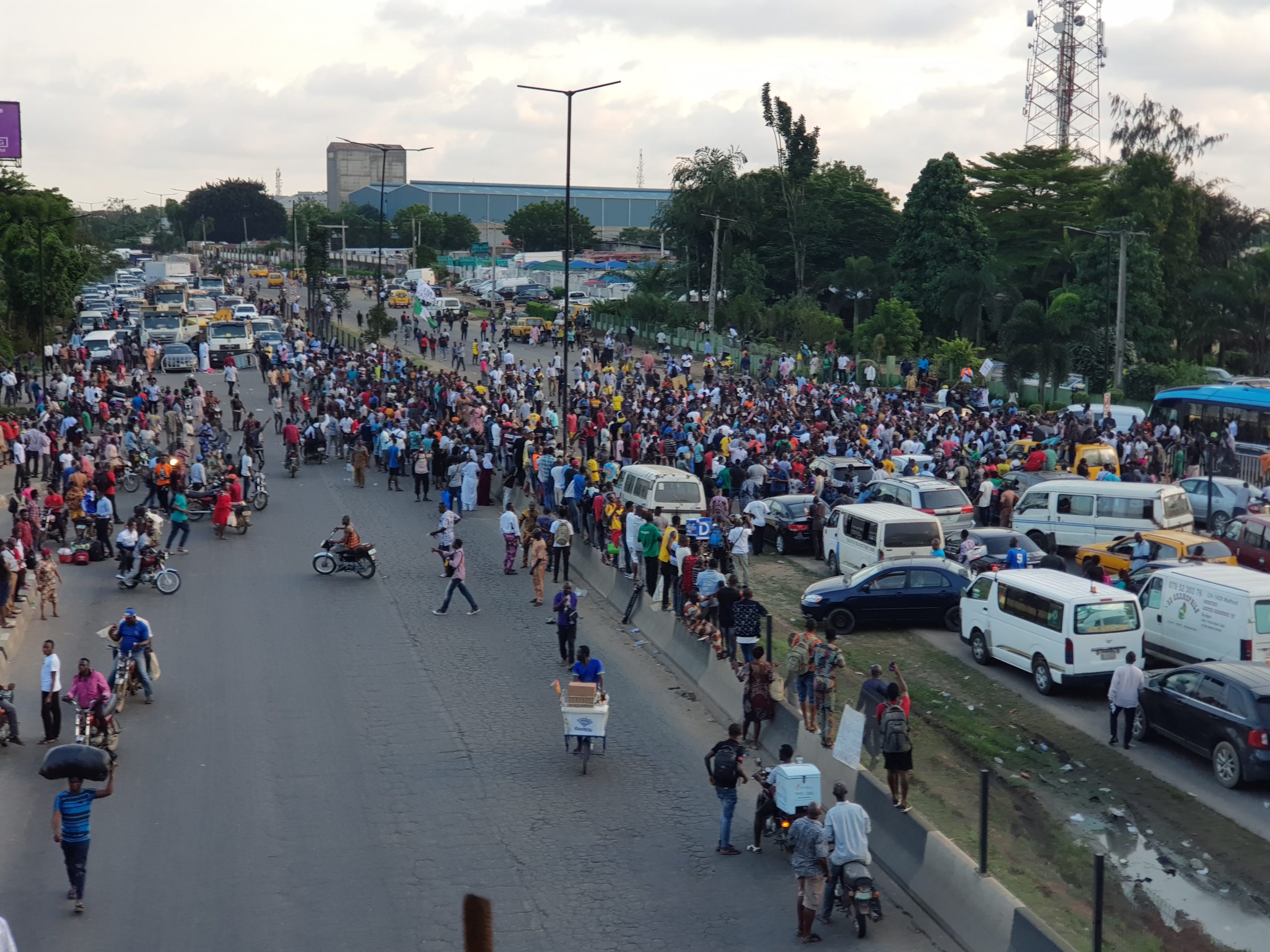 Addressing thousands of youths at the Lekki Tollgate who sang ‘SARS must go’, the governor called for respect for other residents.

Conceding that the protest was legitimate, he pleaded with them not to block the roads while ventilating their grievances.

Sanwo-Olu said he identified with the EndSARS campaigners, noting that their agitation touched the essence of democratic freedom.

He said citizens must never be denied the rights to protest, but urged the protesters not to employ wrong methods to drive home their message.

In a tweet, the governor added: “I want to appeal to the protesters to take a break from protesting tomorrow (today). Tempers are at a highest on all sides at this time and while we work to prevent escalation, the safety of our residents is paramount.”

He said: “The protesters came in their numbers with the intent to break into the station at our Surulere unit and free some of the convicted criminals.

“They were heavily armed with shot guns and fired shots at the officers on duty who were trying to prevent the attack and uphold the integrity of the station.”

Adejobi said Commissioner of Police Hakeem Odumosu would continue to maintain law and order in spite of the unrest created by various protesting groups.

“Odumosu has called on all police officers to exhibit professionalism and continue to maintain law and order in spite of the ongoing public agitation towards the police.

“The protest has been hijacked by criminals who have taken advantage of the situation to breach the peace in the society.

“The Inspector General of Police just disbanded the SARS on Sunday, so the attack on the station was uncalled for,” Adejobi said.

In Abuja the protesters most of who wore black T-shirts rallied at the Berger Bridge, Wuse. They blocked the road while chanting: ‘End police brutality now.’

The blockage of the road led to a long queue of vehicles on major roads.

This paralysed vehicular traffic in the area as motorists made U-turn to avoid getting caught up in the resultant gridlock.

Commuters avoided the axis due to the protests.

The Lagos protesters barred motorists and commuters from passing through Lekki Toll Gate on Lagos-Epe expressway.

This led to several hours of gridlock as commuters and motorists on their way to work were on standstill while others returned home.

The protesters demanded that the police authorities “carry out psychological evaluation and re-training of all disbanded SARS officers before they are redeployed.”

They also demanded the “release of all arrested protesters, justice for all deceased victims of police brutality and appropriate compensation for their families.”

They asked for “increased salaries for police officers as well as establishment of an independent body to oversee the investigation and prosecution of police misconduct within 10 days.”

One of the protesters, who pleaded anonymity, told The News Agency of Nigeria (NAN) that the protesters were “demanding more than a mere disbandment of SARS but the immediate prosecution of officers found guilty of unprofessional conduct.

“The IG only made an announcement but we want President Muhammadu Buhari to also give an executive order on this. We don’t want audio ban,” another protester said.

A protester, who works as a studio editor, Abiodun Olawale, said the people were angry because the government had been paying only lip service to police reforms.

“This is the fourth time we are clamouring for the end of SARS and we will not relent until something is done.

“Even the report of the last panel to reform the police is yet to be implemented, how can we believe the IG now,” he said.

A resident of Ajah, Justine Emejom, said he drove out of his house as early as 5 a.m. on his way to office on Lagos Island but he had to turn back after over six hours of gridlock and frustration.

“Despite efforts to manoeuvre through inner routes, following total standstill caused by the protesters, I had to drive back after I called my office to explain,” he said.

Bearing banners that read, “Nollywood is saying: #justiceforJimohIshaq and others, #Endtotureinstations, #Endpolicebrutality and #ThankyouforendingSARS,” the actors said the police force needs a reform.