MAJOR cities in the country, including the Federal Capital Territory (FCT), Abuja, witnessed more protests against police brutality on Wednesday. The protests are continuing even when operatives of the disbanded Special Anti-Robbery Squad (SARS) are handing over in the states to return to the Force Headquarters in Abuja.

Several residents who had to access the toll gate to get to work returned home because of the massive traffic.

The protests also continued in Alausa, Iyana-Ipaja, Ikorodu, Surulere, Lagos Mainland and Apapa. A fire Engine belonging to the Lagos State Fire and Rescue Service was attacked and damaged by some of the protesters at Alausa. The acting head of the agency, Mrs Margaret Adeseye, confirmed this in a statement.

According to the protesters at the Lekki-Epe Expressway toll gate, the SWAT is a SARS in another garb.

“The IGP does not seem to understand our grievances. We are not talking about name changing, rather a thorough reformation,” a protester said.

Another protester urged the government to ensure proper remuneration of the policemen.

The protesters’ camps continued to bubble with live Disc Jockeys (DJs), dishing out music to the admiration of the protesters. There were enough food and drinks to keep up the momentum.

Some of the protesters are planning to show England Premiership League matches live at the Lekki-Epe Expressway toll gate. Some were even suggesting on the social media that churches should hold their Sunday services at the protest grounds.

In Iyana-Ipaja and Ikorodu, it was a dancing galore. While the protesters at Iyana-Ipaja danced to the Idris AbdulKareem’s popular ‘Nigeria jagajaga’ lyrics, those in Ikorodu staged dancing competition.

Already all pending investigations and suspects in their custody have been handed over to the State Criminal Investigation Department (SCID), Panti, Yaba, while their weapons were returned to the state’s armoury.

According to a statement by spokesman, Olumuyiwa Adejobi, the CP warned them to desist from parading themselves as SARS operatives or any operatives under whatever nomenclature in the state.

Protesters in Anambra State claimed twelve people were killed by policemen. The protesters stormed Awka, the state capital demanding the prosecution of members of the disbanded SARS. They drove and marched through some streets in Awka, the state-owned Anambra Broadcasting Service ABS and the State House of Assembly.

The protesters carried placards with different inscriptions, including, “those who killed innocent people must be prosecuted, we will not rest until justice is done”.

The protesters listed some of the communities that mostly lost their sons in the hands of SARS as Onitsha, Oraifite, Awka, Ozubulu, Ihiala, Nando and Aguleri.

At the SARS office in Awkuzu, Oyi local government area, operations were in full swing. Members of SARs were seen in their usual mufti attires with AK -47 riffles, parading the premises.

The Nation gathered that the suspects being held at the SARs office were still there. 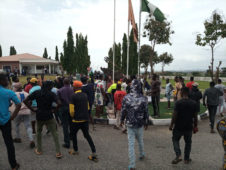 Warri, Delta State, was grounded on Wednesday. Hundreds of protesters took to major roads of Warri and Effurun.

The youths kicked off the peaceful march at about 8 am from the popular Delta Mall in Effurun Roundabout, walked through the Effurun-Warri Sapele Road, stopping at Airport, Jakpa, Enerhen and Deco Junctions, as well as marching on to Estate Roundabout, all in Warri South and Uvwie council areas. The procession caused heavy traffic across the twin cities. Some motorists, business people and pedestrians gave a nod to the movement, cheering them on.

The protesters bore placards with inscriptions such as “End Police Brutality,” Stop Killing Us,” End SWAT, End SARS,” We said EndSARS, not change them,” I am a filmmaker, I am not a fraudster. Stop harassing me,” among others.

Lokoja, the Kogi State capital, also felt the weight of the protests. Youths stormed the Lugard House seat of government.

The youths who turned out in their hundreds demanded to see the governor. Efforts by the Chief of Staff to the Governor, Jamiu Asuku, to plead with them that the governor was at the weekly State Executive Council meeting fell on deaf ears.

According to Bernard Ajewole, spokesperson of the protesting youths, “What we want is beyond disbandment and replacing it with another. Just yesterday, they came to our campus (Prince Abubakar Audu University) Ayingba in their uniforms, where they arrested some students and made them to part with N100,000 before they were released.

“This is happening despite the Inspector General’s directives that members of the disbanded SARS should report in Abuja for debriefing.

“The youth are gathered here today to give solidarity to fellow youths protesting police brutality across the country.

“We want Nigerian police that is refined enough to tackle various acts of criminality without extrajudicial killings,” he said.

“Let me thank all of you for the peaceful manner in which this has been conducted. I want to thank all the youths and all the leaders and also express our concern on what this fight has been all about.

”Let me also appreciate the President of Nigeria who had acted promptly to have announced the disbandment of SARS completely. If the President that we know has given that commitment, I trust that he will keep to it. At the state here, I want to assure you that there will never be anything like police brutality,” he said.

The governor said the state government was engaging the police command in the state to ensure a harmonious relationship among the institutions of government and communities.

The leadership of the Indigenous People of Biafra (IPOB) threw its weight behind the protests. In a statement by its Publicity Secretary, Emma Powerful, IPOB commended the youths for putting aside their ethnic and religious differences to protest the excesses of SARS operatives and police officers in general.

“IPOB gives kudos to all those involved in the on-going #ENDSARS protest all over the British created contraption. We are happy that at last the youths of this generation have come to terms with the brutal reality of life in Nigeria which we saw many years back,” the group said.

In Oyo State, members of the Oyo State House of Assembly yesterday observed a minute silence for Jimoh Isiaka and two other dead victims of the #EndSARS protest that rocked the ancient city of Ogbomosho on Sunday.

The honour for the victims of the protest followed a request made to the House by the lawmaker representing Ogbomosho North state constituency, Mrs Olawumi Oladeji when she raised a matter of urgent public importance on the “Urgent Need to Investigate Killing of Jimoh Isiaka During the ‘End SARS’ Protest in Ogbomosho and Invasion of Soun’s Palace by yet-to-be-identified hoodlums”.

The Assembly called on Governor Seyi Makinde to order an investigation into the killing of Jimoh Isiaka as well as the invasion of the Soun of Ogbomoso’s palace.

RCCG: SWAT should not be old wine in a new bottle

The Redeemed Christian Church of God (RCCG) said the Special Weapons and Tactics Team (SWAT) should not be a glass of old wine in a new bottle.

Assistant General Overseer, (Administration and Personnel), Pastor Johnson Odesola, said: “The Church welcomes the disbandment of the SARS, and notes the establishment of a new outfit called the Special Weapons and Tactics Team (SWAT) but warned that it should not become a case of old wine in a new bottle.

“The Church reiterated its call on Government to take urgent steps to tackle the rising rate of unemployment, decay in the nation’s educational system and the general harsh economic situation in the country.”

He appealed to the protesters to comport themselves orderly and eschew violence and destruction.

The Coalition of Northern Groups (CNG) yesterday directed all its chapters across the 19 northern states to begin an expanded #ENDSARS protests across the region today.

A statement by the coalition’s spokesman, Abdul-Azeez Suleiman, said: “CNG has followed developments around the bold and necessary steps taken by Nigerian citizens in some parts of the country including some northern states to call attention to the deteriorating national security and other pressing concerns around the dwindling economy, prohibitive commodity prices, rising inflation amidst mounting poverty and prolonged stay at home by university students.”

Ekweremadu regretted that the Bill to amend the constitution to create state police, which he sponsored in the 8th Senate as well as the current Senate, had not received the required political support.

Ekweremadu, in a statement by his Media Adviser, Uche Anichukwu, said the Federal Government was still addressing the symptoms rather than the real illness.

Kaduna State Governor Abdullahi Ganduje yesterday urged President Muhammadu Buhari and the Inspector-General of Police Mohammed Adamu to flush out the bad elements in the police.

Ganduje joined hundreds of youths who gathered at the Government House gate to support the ongoing police reforms.

“We are calling on the president and the police IG to fish out those bad elements within the police force. This will pave the way for an intelligent and reformed security institution.

“We appeal to the IGP that the reformation, through SWAT, should be consolidated to protect the Nigerian people.”